OBJECTIVE: To learn about the internal parts of an atom. To understand Rutherford’s experiment to characterize the atom’s structure.

He concluded that the nucleus must have a positive charge to balance the negative charge of the electrons and that it must be small and dense. 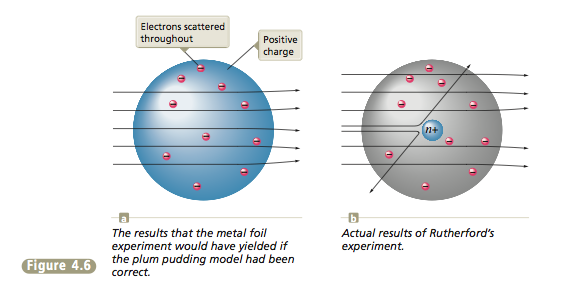 Rutherford reasoned that the hydrogen atom has a single proton at its center and one electron moving through space at a relatively large distance from the proton (the hydrogen nucleus). He also reasoned that other atoms must have nuclei (the plural of nucleus) composed of many protons bound together somehow. In addition, Rutherford and a coworker, James Chadwick, were able to show in 1932 that most nuclei also contain a neutral particle that they named the neutron. A neutron is slightly more massive than a proton but has no charge.