OBJECTIVE: To learn to apply the VSEPR model to molecules with double bonds. 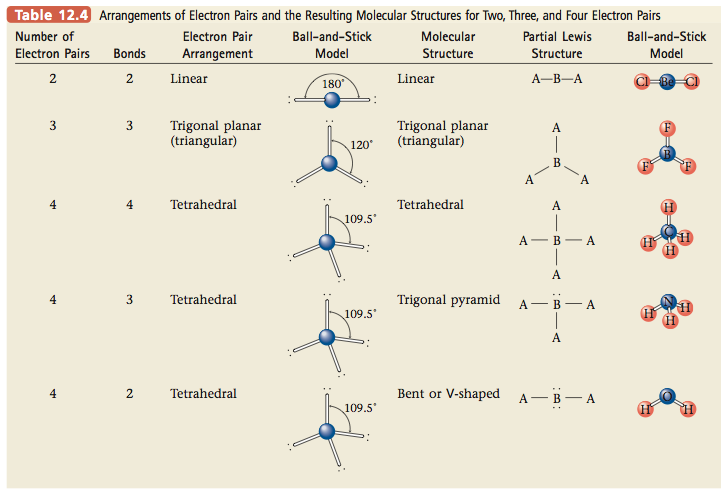 First we will examine the structure of carbon dioxide, a substance that may be contributing to the warming of the earth. The carbon dioxide molecule has the Lewis structure

as discussed in Section 12.7. Carbon dioxide is known by experiment to be a linear molecule. That is, it has a 180° bond angle.

Recall from Section 12.9 that two electron pairs around a central atom can minimize their mutual repulsions by taking positions on opposite sides of the atom (at 180° from each other). This causes a molecule like BeCl2, which has the Lewis structure

to have a linear structure. Now recall that CO2 has two double bonds and is known to be linear, so the double bonds must be at 180° from each other. Therefore, we conclude that each double bond in this molecule acts effec- tively as one repulsive unit. This conclusion makes sense if we think of a bond in terms of an electron density “cloud” between two atoms. For example, we can picture the single bonds in BeCl2 as follows:

The minimum repulsion between these two electron density clouds occurs when they are on opposite sides of the Be atom (180° angle between them). Each double bond in CO2 involves the sharing of four electrons between the carbon atom and an oxygen atom. Thus we might expect the bonding cloud to be “fatter” than for a single bond:

However, the repulsive effects of these two clouds produce the same result as for single bonds; the bonding clouds have minimum repulsions when they are positioned on opposite sides of the carbon. The bond angle is 180°, and so the molecule is linear:

In summary, examination of CO2 leads us to the conclusion that in using the VSEPR model for molecules with double bonds, each double bond should be treated the same as a single bond. In other words, although a double bond involves four electrons, these electrons are restricted to the space between a given pair of atoms. Therefore, these four electrons do not func- tion as two independent pairs but are “tied together” to form one effective repulsive unit.

We reach this same conclusion by considering the known structures of other molecules that contain double bonds. For example, consider the ozone molecule, which has eighteen valence electrons and exhibits two resonance structures:

The ozone molecule is known to have a bond angle close to 120°. Recall that 120° angles represent the minimum repulsion for three pairs of electrons.

This indicates that the double bond in the ozone molecule is behaving as one effective repulsive unit:

These and other examples lead us to the following rule: When using the VSEPR model to predict the molecular geometry of a molecule, a double bond is counted the same as a single electron pair.

Thus CO2 has two “effective pairs” that lead to its linear structure, whereas O3 has three “effective pairs” that lead to its bent structure with a 120° bond angle. Therefore, to use the VSEPR model for molecules (or ions) that have double bonds, we use the same steps as those given in Section 12.9, but we count any double bond the same as a single electron pair. Although we have not shown it here, triple bonds also count as one repulsive unit in applying the VSEPR model.