OBJECTIVE: To learn two methods of separating mixtures.
We have seen that the matter found in nature is typically a mixture of pure substances. For example, seawater is water containing dissolved minerals. We can separate the water from the minerals by boiling, which changes the water to steam (gaseous water) and leaves the minerals behind as solids. If we collect and cool the steam, it condenses to pure water. This separation process, called distillation, is shown in Figure 3.6.

Distillation is the method that uses the idea heating solutions to separate the different liquids and some solids
- The temperature at which a liquid will boiling and evaporate.
- Different liquids will have different boiling point 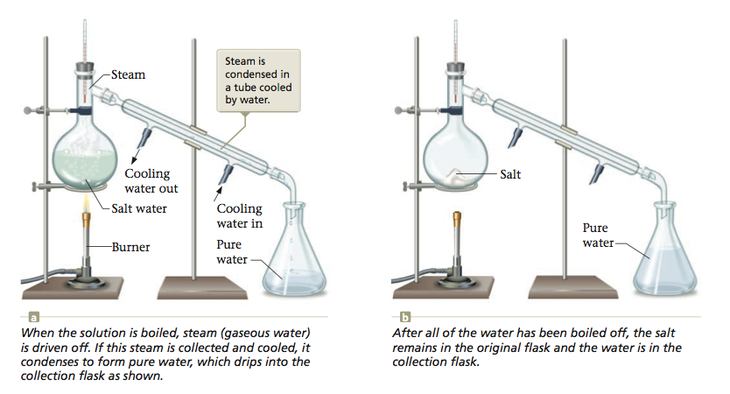 Filtration- separates liquid from a solid.

Suppose we scooped up some sand with our sample of seawater. This sample is a heterogeneous mixture, because it contains an undissolved solid as well as the saltwater solution. We can separate out the sand by simple filtration. We pour the mixture onto a mesh, such as a filter paper, which allows the liquid to pass through and leaves the solid behind (see Figure 3.8). The salt can then be separated from the water by distillation. The total separation process is represented in Figure 3.9. All the changes involved are physical changes.
We can summarize the description of matter given in this chapter with the diagram shown in Figure 3.10. Note that a given sample of matter can be a pure substance (either an element or a compound) or, more commonly, a mixture (homogeneous or heterogeneous). We have seen that all matter exists as elements or can be broken down into elements, the most fundamental substances we have encountered up to this point. We will have more to say about the nature of elements in the next chapter.