OBJECTIVE: To learn about the relative abundances of the elements. To learn the names of some elements.
The Greeks were the first to try to explain why chemical changes occur. By about 400 B.C. they had proposed that all matter was composed of four fundamental substances: fire, earth, water, and air. The next 2000 years of chemical history were dominated by alchemy.

The first scientist to recognize the importance of careful measurements was the Irishman Robert Boyle (1627–1691). Boyle is best known for his pioneering work on the properties of gases, but his most important contribution to science was probably his insistence that science should be firmly grounded in experiments.

As Boyle’s experimental definition of an element became generally accepted, the list of known elements grew, and the Greek system of four elements died. But although Boyle was an excellent scientist, he was not always right. For some reason he ignored his own definition of an element and clung to the alchemists’ views that metals were not true elements and that a way would be found eventually to change one metal into another.

In studying the materials of the earth (and other parts of the universe), scientists have found that all matter can be broken down chemically into about 100 different elements. Presently about 116 different elements are known,* 88 of which occur naturally. (The rest have been made in laboratories.)

In Table 4.1, the elements are listed in order of their abundance (mass percent) in the earth’s crust, oceans, and atmosphere. Note that nearly half of the mass is accounted for by oxygen alone. 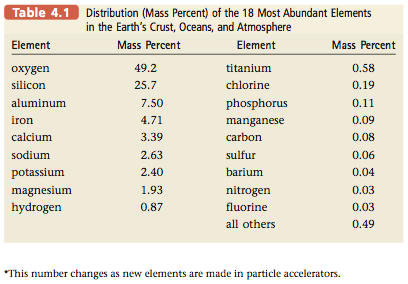 Table 4.2 shows the distribution of elements in the human body. Oxygen, carbon, hydrogen, and nitrogen form the basis for all biologically important molecules. Some elements found in the body (called trace elements) are crucial for life, even though they are present in relatively small amounts. 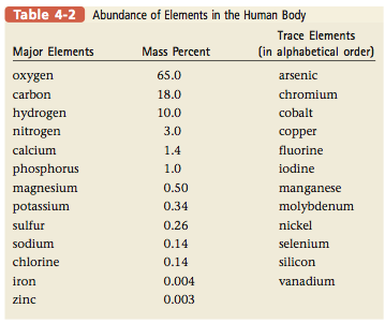